Last night’s presidential brawl of a debate was definitely an eye-opener. 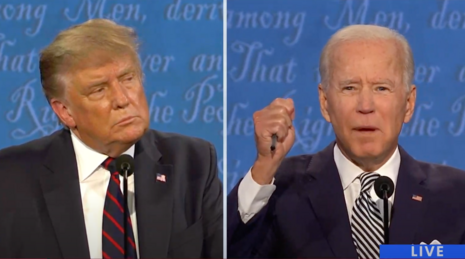 On the media side, nothing was more eye-opening than The New York Times actually taking the time to fact-check false claims Democratic presidential candidate Joe Biden made on trade and the economy.

The Times economics reporter Jim Tankersley blew up a major talking point Biden tried to sell during the debate: “‘[W]e left him [Trump] a booming economy. And he caused the recession.’” According to Tankersley, that claim was “false. The economy was not ‘booming’ in the final year of Mr. Biden’s time as vice president and Mr. Trump did not ‘cause’ the pandemic recession.” Also, “[T]here is no evidence Mr. Trump’s actions caused the recession: every major wealthy country in the world has experienced a sharp economic contraction along with its outbreak of the virus.”

In another fact-check by trade and international economics writer for The Times Ana Swanson, Biden had stated: “‘We have a higher deficit with China now than we did before.’” That claim was also rated “false.” Swanson wrote: “The trade deficit with China — the gap between what America exports to China and what it imports — fell sharply between 2018 and 2019 as Mr. Trump’s trade war suppressed commerce between the world’s largest economies.”

Of course, writers for the liberal Times, Tankersley and Swanson, couldn’t be all that objective. Swanson completely diverted from Biden’s statement concerning China and deployed a red herring as a sub-header that “the U.S. trade deficit with the rest of the world is trending up.” That has nothing to do with Biden’s “false” statement concerning the deficit between the U.S. and China specifically.

In his economy fact-check, Tankersley still tried to throw a life-line to Biden by saying the Obama economy was healthy before growth dipped in 2016. Tankersley wrote: “When President Barack Obama and Mr. Biden left office, the economy was healthy, though growth had dipped below 2 percent in 2016 in part because of a contraction in business investment stemming in part from a plunge in oil prices rippling through America’s energy industry. Unemployment had fallen steadily.” Tankersley left out context in the unemployment rate drop that blows a hole in his claim that the Obama-Biden “economy was healthy.”

According to the Bureau of Labor Statistics, “There is only one official definition of unemployment—people who are jobless, actively seeking work, and available to take a job.” Measuring that figure against the number of people who left the labor force under the Obama-Biden economy tells a different story from what Tankersley portrayed. Individuals that are unemployed and “have given up looking altogether, even though they want to work” are not considered in the unemployment rate, according to Investopedia. [Emphasis added.]

The Washington Free Beacon reported that “Since President Barack Obama took office in January 2009, the number of employed Americans increased by 9.9 million, but there were 14.6 million more who left the labor force.” This was an important bit of information Tankersley chose to leave out. This means all the job gains under the Obama Administration were canceled out by the number of people who left the labor force altogether. [Emphasis added.]

Tankersley did credit President Donald Trump, albeit while still trying to prop up the Obama/Biden economy:

Tankersley was being misleading. A February Axios report showed that “[a]verage economic growth under President Trump has outpaced the growth under Barack Obama.” Specifically, average annualized GDP growth at the time for Trump was 2.5 percent. By contrast, both Obama’s first and second terms were 2.0 percent and 2.3 percent respectively.

The Washington Examiner released an editorial that same month, which said: “While Obama hoped his presidency would change the plight of the jobless, it’s the Trump economy that has achieved what Obama dreamed of and never accomplished.” [Emphasis added.]

Conservatives are under attack. Contact The New York Times at 800-698-4637 and demand it continue to fact-check false claims levied against the economy.

In hard-hit Peru, worry mounts over both COVID-19 and dengue

ABOUT US
Contact us: [email protected]
© 2020 - Pursuit Of Patriots - All Rights Reserved.
MORE STORIES

In hard-hit Peru, worry mounts over both COVID-19 and dengue